Lessons I learnt from planning an event

Hey everyone! As many of you are aware I put on a charity spoken word event for the 18th of June. I’m happy to say that I raised over £200 for the charity ‘Dig Deep’ which is great news!

So. It was the first time that I’d ever planned an event independently before. How did it go? Well, it was interesting to say the least! I’ll leave a few flyers which will further buttress my point: 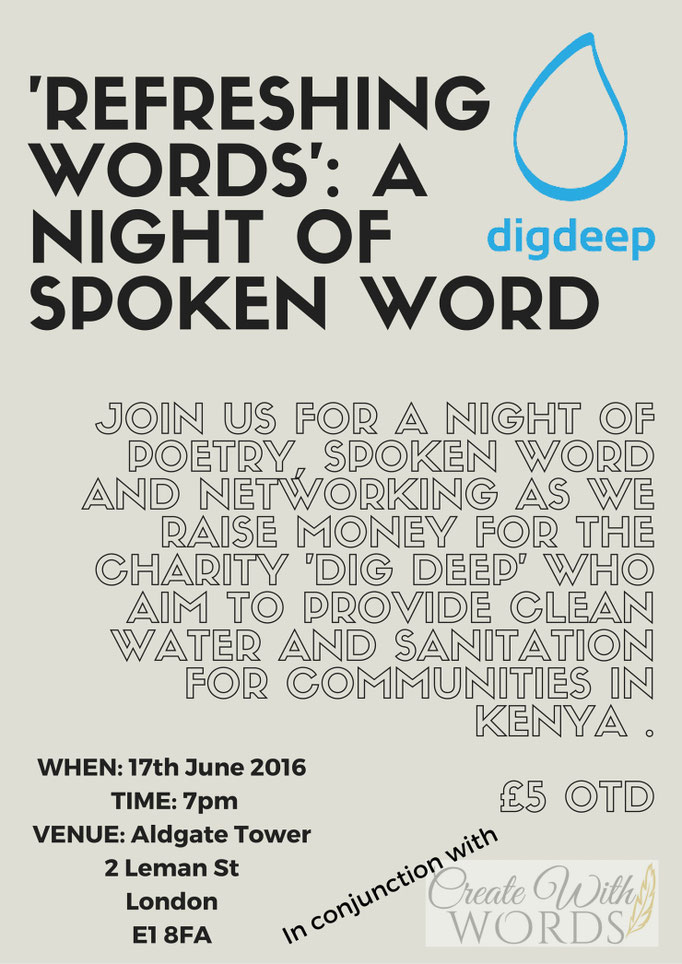 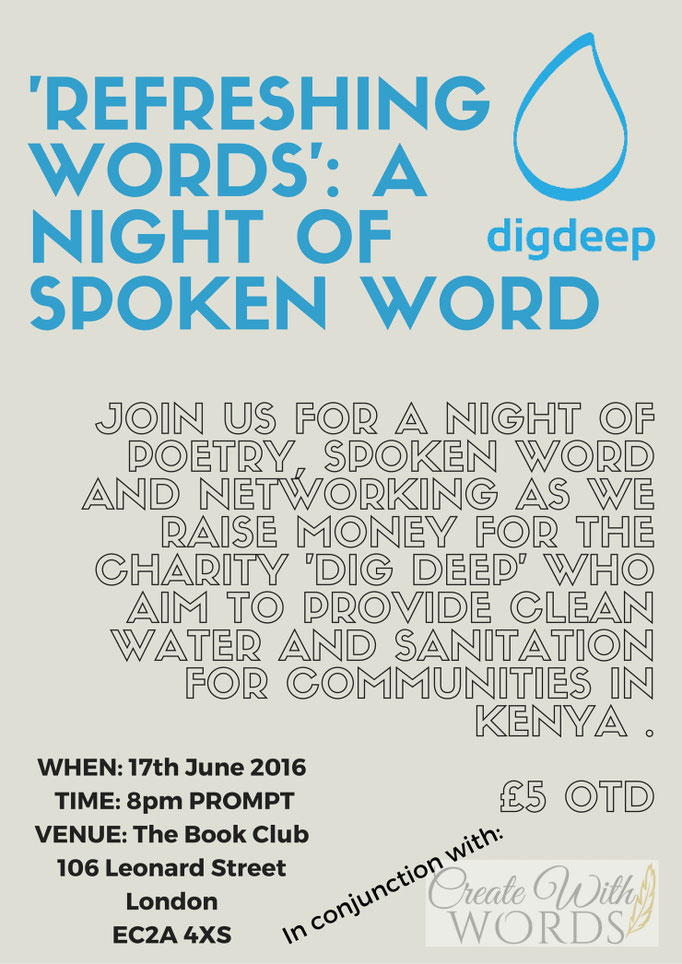 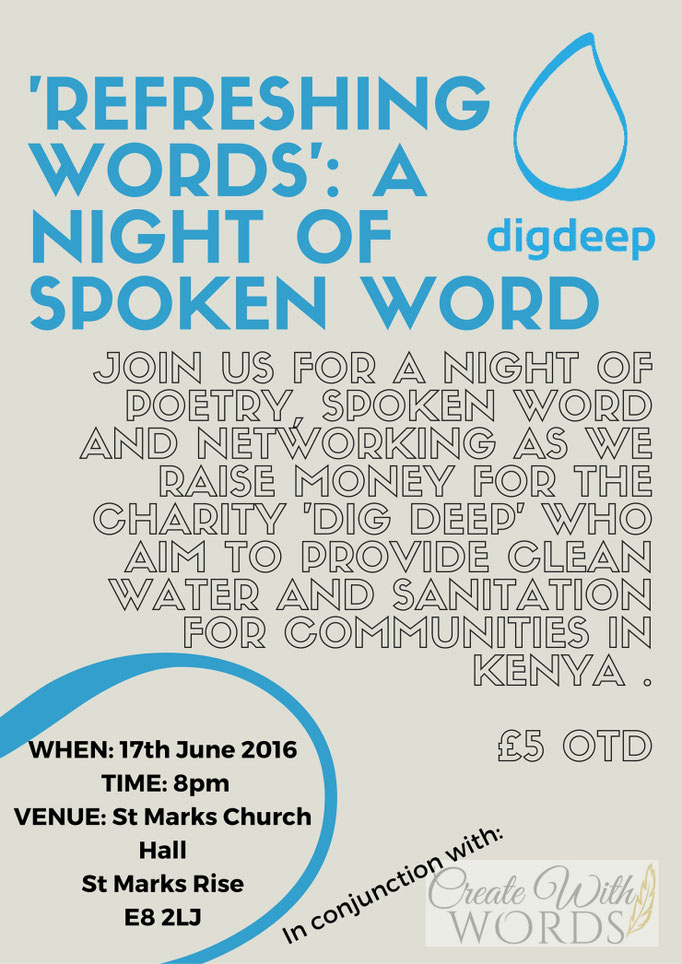 Notice the difference? Well if it isn’t very obvious it’s the venue change(s). The idea to do the event was formed on a whim and it was helped by the fact that I had been offered a space that I could use free of charge. Unfortunately that fell through and so the hunt for another venue began. Bear in mind that I had already started spreading the word and getting poets for the night. There were talks of postponing the date to which I was absolutely against as availability of poets would differ and besides, I’d set my mind on that date and on that day it would remain.

I’m going to list some of the lessons I learnt, in no particular order:

I made the dreaded mistake of booking the 2nd venue online without seeing it beforehand. I went ahead with it because I knew that they had done poetry events before in the past. Furthermore, I had clearly detailed what type of event it would be and so I paid and they agreed. This is where the real problem began. It became evident that the atmosphere would not be conducive to the type of event that I want to hold. I went there on the 13th, the Tuesday before the event and my heart well and truly sank. I had a lovely discussion with the manager and it was obvious that the venue wouldn’t work at that time. I was able to get my money back which was great but of course now I was on the hunt for another venue. Bear in mind that this is two days before the event and I have people asking me about final details and so on. I didn’t tell anyone immediately because you don’t want to get people worried. Ironically I ended up using a venue that I had been wary of using before as it was a church hall. * Special shoutout to my girl Zoe-Grace for hooking me up with the venue❤❤❤ *. I say this because I didn’t want to use a church hall as it wasn’t necessarily a ‘Christian event’ so to speak but evidently God thought otherwise. I had no regrets and the venue was perfect for what I needed.

Managing expectations was a key thing I learnt especially the expectations of performers and also the general public.For me it was very important to be professional in my dealings with others as although I had some friends performing I also had other people who I had never met before.

Have a back up. Always.

People will ‘mean well’ and promise heaven and earth to help but ultimately very few actually do. This isn’t to slight anyone and I get that life happens etc but it is what it is at the end of the day. What I learnt was to take what people promise with a pinch of salt. Smile, express gratitude but realise that we are all only human and we can let each other down. Some may feel bad and apologise and others won’t, such is life but you move on from it. I have to give the biggest shoutout to my lovely sisters Funmi, Dunsin and Tofunmi for helping me set up; perks of having a big family.😉

The unexpected will happen.

It’s all very well having a plan and timings for the event but guaranteed it does not always go to plan. Some poets were late so the order changed a bit and my host was late (through no fault of her own) . I was thrown into temporary panic but thank God my friend Zoe agreed to do it and she was great too.

Know your vision and stick to it.

People will offer ‘advice’ which often times you never asked for but just politely smile anyway. You are under no obligation to take it and often times they don’t see what you see. Stick to your guns and take the advice that you want to take and don’t feel obliged to take on every advice. Even on the night I still had people offering ‘advice’. Advice which I never solicited for but hey, such is life. You smile and keep it moving.

Have fun and remember the bigger picture!

As weird as it sounds and through all the hiccups I actually enjoyed the process. It wasn’t easy and there was a very real possibility that the event wouldn’t go ahead but it did. The best piece of feedback I got was at the end where people weren’t in a rush to leave which is always a good thing. Even before the event and definitely after I have had people asking ‘When is the next one?’,  to which I respond with a smile .

Who knows? It could be the beginning of something great.

The one thing I wish I had gotten was a videographer though I know that people recorded on the various devices but still, it would have been nice. I did have a photographer cover the event and below are some the pictures. Enjoy!